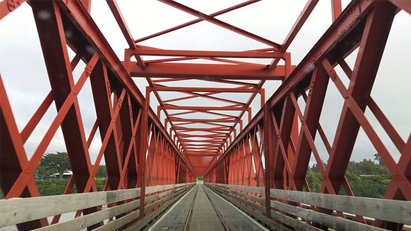 MCU-Coatings products have been applied to thousands of bridges around the world, and for good reason!  Have a good look at the original Astoria Megler bridge case study if you want to really understand how superior our coatings’ long term performance is when compared to other alternatives.  Although the findings from the comparative testing in this case study are dated the competition has not changed and, as indicated in recent independent laboratory tests, the performance of MCU-Coatings has continued to improve.

The Astoria Bridge was the first major project where a moisture cured coating was applied. This bridge is on the Pacific Oregon coast, so has been subjected to constant salt fog and condensation. Originally when the coating was applied it was part of a 6-year joint Federal Highways and Oregon Department of Transportation coatings evaluation program, which included 10 of the top-performing technologies available at the time, including; various zinc systems, epoxies, water-born systems, a moisture cured urethane and even rust converters – most of which are still being sold today.

This test concluded that the moisture cured urethane system was the only coating that showed less than 0.01% corrosion after 6 years exposure to the marine salt and fog in a C 5 environment. In 2020, 33 years after the original Bill Brinton moisture cured urethane coating had been applied it was still showing less than 0.01% corrosion, so the inspectors advised that they would conduct their next check on the coating on the 40 year anniversary.

Our 2-coat paint system translates into faster and more predictable project completion times, because it is not limited by climatic weather restrictions like other coatings are. It also means that MCU-Coatings can be applied all year round.

When you then consider the coating’s durability and long term protection, asset owners are able to reduce their maintenance budgets, often by more than 50%.