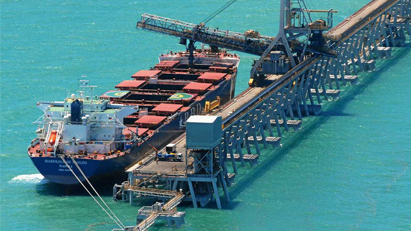 This environment is exposed to the highest corrosion classification (C 5 V H). The most severe corrosion occurs at the waterline, where there is the greatest differential in oxygen concentration between the atmosphere and the water. This happens because the portion of the substrate exposed to higher amounts of oxygen (the area exposed to air) becomes a cathode, while the portion of the substrate exposed to less oxygen (the area in contact with water) becomes an anode. The creation of an anode and a cathode allows oxidation to occur.

Waterline corrosion is combated by coating the material being placed in the water with a zinc rich primer that acts as a sacrificial anode and this reduces the direct oxygen exposure across the substrate to a uniform, minimum amount.  MCU- Coatings miozinc primer is the best universal primer on the market because of its adhesion, flexibility, barrier protection and longevity, which has allowed us to solve many of the toughest coating problems.

It is challenging to protect steel and concrete near the water at the best of times, without having to deal with tides, the weather and long curing times associated with traditional corrosion coatings. MCU-Coatings overcomes many of these problems.

Our standard specification for wharves and jetties is 170µm DFT MCU-Zinc Primer and 90µm DFT MCU-Miotopcoat:

MCU-Coatings products are ideal for fast project completion times; they adhere really well on mechanically-prepared surfaces and only require 2 coats. The system could not be simpler.